How to be an international full degree and not die trying

It’s a rite of passage for Hey You AU contributors to disappear for a few months and then apologize for the lack of posts, and today it’s my turn. Where did March go? Where did April go? It’s been such a short period of time, but we have somehow experienced at least three of the four seasons since I last wrote here.

Now, only a few weeks of lectures and a few weeks of exams stand between me and summer vacation. One thing I want to do is get back to exploring Aarhus because I still haven’t even scraped the surface of what the city has to offer. There are a lot of guided tours on my list that I don’t have time for at the moment, including a tour of the university campus, a poverty walk led by the city’s homeless, and a bicycle tour of the south part of the city, which I haven’t seen much of since I live in the north.

Before I got all BUSY (🙄) I was able to go on a tour led by Aarhus Culture Walk. It was a sunny, breezy, chilly Saturday and I was the only non-Dane on the tour. Fortunately, I understand enough Danish that I was able to follow along with most of what the tour guide was saying, but she reassured me that the guides will of course speak (mostly) English if they need to.

Back in California, I trained as a tour guide with a local museum, so I know that each guide gives a slightly different tour and that despite a guide’s best intentions, sometimes the anecdotes and funny stories aren’t strictly capital-t True. Consider that a disclaimer for the rest of this post… but that said, our guide was a local who shared her childhood memories of Aarhus and how much it has changed, and some of the older people on the tour reminisced as well about the way things used to be.

The most Instagrammed street in Aarhus

It sounds like the way things used to be wasn’t always so nice. Mølleparken is today flanked by trendy Vestergade and iconic Møllestien, but the area was historically a slum and not especially safe. The Latin Quarter used to be the red light district, and the canal (Århus Å) was paved over until 2004 because it stank to high heaven. Now, as you may know, people flock to those parts of town when the weather is nice. 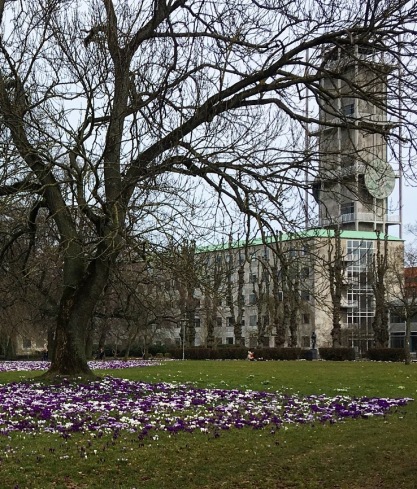 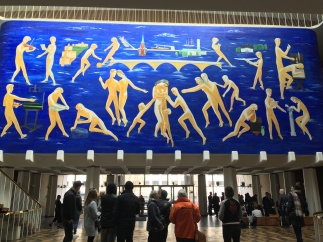 Our guide was interested in architecture, so we learned a lot about some of Aarhus’s special buildings, especially City Hall (Aarhus Rådhuset). On Saturdays, weddings are performed there, but only seven minutes are allotted per couple because they have to accommodate so many people. There was a festive atmosphere, with people sipping champagne, warmly shaking hands, and smiling broadly.

Rådhuset is a very distinctive building inside and out, with the clock tower and Norwegian marble exterior (both features added after the initial building design was criticized for being too “heavy”) and the bogwood flooring and Social Democrat mural in the foyer. There apparently used to also be a large rug with a map of Aarhus woven into it, but it had to be removed because with the city developing so quickly, it was badly outdated. Tours of City Hall are also available (I guess I’ll have to add it to my list).

About the author: Phoebe is a Californian who fell in love with Denmark and decided to come back by any means necessary. Currently, those means include studying for an M. A. in Linguistics.

Talk to us Cancel reply